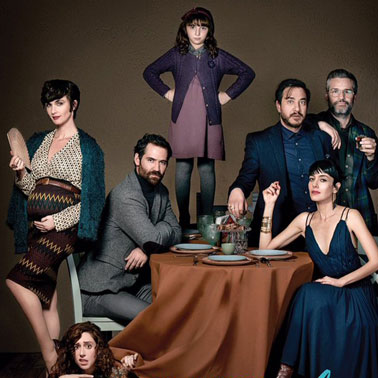 Tales of an Immoral Couple centers on Lucio and Martina, two former lovers whose passionate romance began while attending a strict Catholic high school in Mexico. Twenty-five five years later, they unexpectedly run into each other in the city of San Miguel de Allende and despite still sharing an undiminished love for one another they both pretend to be in happy marriages––even if it’s all lies.

Tales of an Immoral Couple centers on Lucio and Martina, two former lovers whose passionate romance began while attending a strict Catholic high school in Mexico. Twenty-five five years later, they unexpectedly run into each other in the city of San Miguel de Allende and despite still sharing an undiminished love for one another they both pretend to be in happy marriages––even if it’s all lies. As they try to maintain their facades, a comedy of errors ensues that reveals the true reasons why the couple ended up separating in the first place.

MANUEL GARCÍA-RULFO
Talented and well-rounded mexican actor appearing in films such as Bless Me, Ultima, and titular character in the 2016 remake The Magnificent Seven. Multi-facted and versatile Manuel García Rulfo has also appeared in television drama program From Dusk till Dawn: The Series. García-Rulfo will be on screen in the upcoming movie Soldado alongside Benicio del Toro, Josh Brolin and Catherine Keener.

CECILIA SUÁREZ
Emmy-nominated actress and outstanding lead actress Cecilia Suárez has strong on-screen performance. Oscillating from film to television, Suárez has appeared in stellar performances throughout her career such as Sexo, pudor y lágrimas, Todo el Poder, Fidel, Capadocia, which earned her an International Emmy nomination for Best Performance by Actress. Notably, Cecilia was nominated for a silver Ariel Award in 2008 for Párpados Azules.

SEBASTIÁN AGUIRRE
Unique journey to acting success, his breakthrough performance was in the film Obediencia Perfecta in which he earned an Ariel Award for Breakthrough Male Performance; contributing significantly to the development of his career. Following his talented acting path, Aguirre appeared in Güeros, for which he also received an Ariel nomination for Breakthrough Male Performance. With a strong and ascending career, Sebastían Aguirre has been praised and beloved by audiences and international media.

XIMENA ROMO
Trained as an actress at the Casazul Artes Escénicas Argos in Mexico and then received an MA in contemporary acting from the Royal Central School of Speech and Drama of the University of London. She made her breakthrough film debut in 2008 in the movie by Gerardo Naranjo, Voy a explotar. She was co-producer of the short film El retrete de Elena (2010). Romo has appeared in the highly esteemed series Soy tu fan.

NATASHA DUPEYRÓN
Mexican actress and singer, has distinguished roles ranging from soap operas, theater and film. Since her childhood, Natasha has earned revered roles, leading to her upward career. Dupeyrón has appeared in pop culture classics such as María la del Barrio, Rebelde, Amigas y Rivales and Miss XV. In July 2017, Dupeyrón was cast in the Mexican adaptation of the Broadway play, Closer, by Patrick Marber.

Written and directed by:   Manolo Caro

About the Director: Born in Guadalajara, Manolo Caro is a Mexican director, producer and screenwriter working in film and theater. His theater debut was with the play No sé si cortarme las venas o dejármelas largas (I Don’t Know Whether to Cut My Veins or Leave Them Long), which he wrote and directed. It became a hit at the local box office and was sold to different territories worldwide. He then wrote Sin cura, Un dos tres por mí y todos mis amores, I love Romeo y Julieta, and more recently Nunca es tarde para aprender francés. His film debut was with the big screen version of I Don’t Know Whether to Cut My Veins or Leave Them Long, which repeated the big success of the play, and landed in the number three spot for that year’s box office. His second feature film was Amor de mis amores (Love of All My Loves), which went on to win the Audience Award at the Chicago Latino Film FestivalElvira, I’d Give My Life, But I’m Using It, his third feature film, had its international premiere at the Los Angeles Film Festival. He is currently working on a new series for Netflix.